Use Accents in Microsoft Word 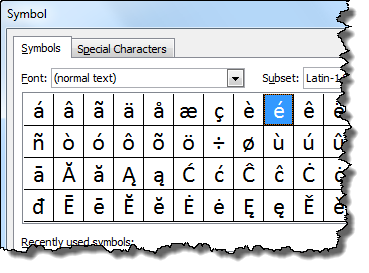 Speak a foreign language with ease!

How to insert acute accents, grave accents, tildes and more

When people have to insert an accent in a Word document, the most common technique is to go to the Insert menu, select Symbol and then locate the required accent (in Word 2003 and earlier) or select "More symbols" under the Symbol button on the Insert tab of the ribbon (in Word 2007). Of course, this works just fine, but it’s not fast. Especially if you have to type a document with lots of accents.

The solution can really save time – it’s a technique which works with very many accents from the major Western European languages such as Spanish, French, German, Swedish, Danish… and so on.

The trick is as follows:

Let’s take an example or two. Suppose you want to type the word mañana, complete with the accent on the first n. There is a symbol representing the tilde accent on the keyboard – it’s the "swung dash" which is above the # symbol (at least that’s where it is on my keyboard!). So, to type mañana, you do the following:

Or one more example: to get the small circular accent above the letter a as in Sophie Gråbol:

One other note on this particular accent – it’s a favourite of mine, because if you type a space after the shortcut combination (instead of the a in the above example) you get the circle above a space – which is the degree symbol!

There are, of course, lots of accents that can’t be inserted with this technique, but there are also very many that you can. So, here’s a table of some of the more common accents, and the symbol to match them. Remember that in addition to holding control, some of these symbols require that you use SHIFT to obtain them (such as the ^ symbol above the number 6 on the keyboard). Also note that the accents can be applied to any necessary character – the letters I’ve chosen to accent in the table are just examples.

In order to make this easier to read, I’ve made the font a bit bigger, so apologies for "shouting"!

About the Author: Andrew Richards

Andrew Richards is the Managing Director of TheIT Service. His background in training goes back to 2000, and he was involved in IT networking and support beyond that. Now he spends his time training cyber-security awareness courses (fun!) and building databases (and training others how to do so too). When not engaged in such important things, he can be found attempting to train his various sheep, chickens and cats.