Santander and Debenhams – how not to do customer service!

I’ve been going through my website and updating content, making sure that it’s all still working and so on. I came across this post, and debated deleting it – it’s nearly 10 years old now, and not really relevant to The IT Service’s core business, but rather a post about Customer Service, which is a bit of a beef of mine.

But then I came to the last paragraph, where I wrote this:

I can only hope – forlornly and no doubt in vain – that one day your lack of concern for customers leads you to follow the likes of Lehman Brothers and Enron as companies who also cared above all else in the bottom line, and forgot exactly how it was generated.

I feel a little bad about this now, because of course Debenhams have now followed Enron et al into non-existence. And I feel bad for all those staff working for Debenhams who were dedicated to their customers and to service. I also feel bad for all those high streets which now lack the large store which anchored the street, and which drew shoppers in. It seems like another nail in the coffin of “real” rather than online shopping.

But perhaps this is a salutary lesson for those companies who don’t obsess about customer service, as I suggested it should be, which makes this lesson sad but inevitable.

Breaking up is hard to do…

I just decided to close my Debenhams card. I felt it was time – after all, I’d had it for a couple of months.

Then came the statement, detailing my one purchase. I thought I’d signed up for payment by direct debit, but apparently not, so I had to remember to call and make my payment, which, having the memory of a goldfish, I of course, forgot to do.

So, when I eventually remembered, my payment was two whole days late.

When the next statement came, it showed my payment of £72.72, which cleared the balance. But on the same day as my payment was received, Santander, who manage the Debenhams card scheme added a “late payment fee” of £12.

Well, okay, I made that APR figure up. But only because I couldn’t find it anywhere on the statement, or on the Debenhams mastercard website. The standard APRs are there, but not the APR they charge if you are overdue on your payment by 2 days.

As a quick aside, and in another example of fabulous service, I tried to find the APR on the Debenhams mastercard website. I found the card “summary box” which didn’t have the info, and which said that its information “is not intended to replace the Terms and Conditions”. Aha! I thought – here’s a link to these full Terms and Conditions:

Interestingly, when clicked, it results in this: 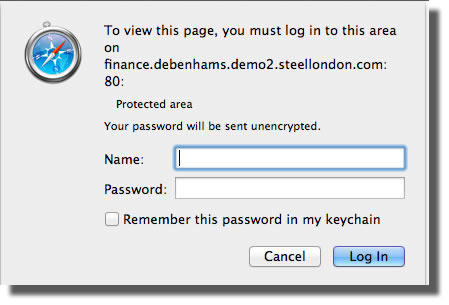 Now I’ve no idea who owns the domain “finance.debenhams.demo2.steellondon.com”. But I hope it’s something to do with Debenhams. Although it didn’t really instill confidence that it has “demo2” as part of the domain. And the word “steel” – however they choose to spell it, it’s not a word I want to see in my credit card provider’s website.

Surely that can’t be legal?! To prevent a cardholder from accessing their Ts and Cs?

Anyway, I decided that I would just go ahead and cancel the card, as I would run the risk of bankruptcy if I ever bought a pair of socks and left the payment overdue by a day or two.

…but it’s made easier when you have a script

I called and eventually entered all the menu numbers, account numbers and bits of security info required to speak to someone.

Having taken all the security details again (presumably in case I’d forgotten them while trying to get through to her) she asked what I wanted.

“To cancel my card”

“Yes, because I want to cancel my card.”

“How much do you want to pay?”

“The full amount because I want to cancel my card.”

[Here’s where it gets really good.]

“I will cancel your account now. Is there any particular reason why you are cancelling it?

“Yes, because I had a £12 charge, and £1.67 in interest for missing one payment by two days, and I think that’s a bit extortionate.”

[Ignoring what I’ve said] “You must cut up your card and ensure that you cut through the chip and the strip. When your next statement arrives you must pay any outstanding balance.”

“Outstanding balance? I thought I’d cleared that. Can you tell me if there’s likely to be any remaining balance or interest?”

That’s it! Not a Yes or a No, or even a “Well I don’t really know”. Just the statement:

Now I know it’s not really her fault, because she’s just an underpaid…

No, scrap that. I don’t care how little you’re being paid, or how much you hate your job, or how much pressure you’re under to be as rude as possible to customers – YOU’RE STILL A HUMAN! You still have interactions and conversations, and you still could make the tiniest effort to outshine a dalek in the personality stakes.

And Santander – WHY do you insist on providing such poor service? I nearly didn’t take out the card with Debenhams when I found that it would be you providing it, because I’ve had experience of your service before – like the time we’d queued in one of your branches for 20 minutes to see an adviser, only to be told “We’re closing now, you’ll have to leave”. (No joke!)

But have you learned NOTHING from the events of the past few years about service, humility, your reliance on public goodwill and the importance of doing more than just making money?

Apparently not. And it sickens me. It actually sickens me. I can only hope – forlornly and no doubt in vain – that one day your lack of concern for customers leads you to follow the likes of Lehman Brothers and Enron as companies who also cared above all else in the bottom line, and forgot exactly how it was generated.


When did you last give your trainer a gift?


Councils CAN use legitimate interest as a lawful basis under GDPR.


15 things you need to know about the GDPR